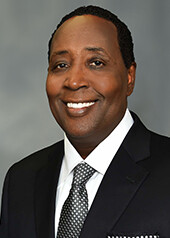 Pastor Darrell Jackson, Sr., son of the late Bishop Andrew Charles “A.C.” Jackson and Jannie Lumpkin Jackson was born in Columbia, South Carolina. He is the oldest of five children. After graduating from the Richland County public school system (Dreher High School), he earned his Bachelor of Arts degree from Benedict College, majoring in Political Science with a concentration in Public Administration. While a student at Benedict College, he served as president of the Student Government Association, and was the recipient of the Most Distinguished Student Award. He received a Master of Arts degree from Columbia International University. In 2000, he received an Honorary Doctorate degree from Richard Stockton College of New Jersey, and in 2002, he received an Honorary Doctorate degree from his alma mater, Benedict College of Columbia, South Carolina. In 2016, he received an Honorary Doctorate degree from Columbia International University of Columbia, South Carolina.

Pastor Jackson has always been involved in civic affairs. He served as Commissioner for Richland County School District One from 1990-1992. In November of 1992, he was elected to the South Carolina Senate, becoming, at the time, the state’s youngest African-American Senator ever elected. Jackson continues to serve in the South Carolina Senate today (District 21), where he represents Richland County.

As a businessman, Darrell Jackson, Sr. has enjoyed unparalleled success as the founder and owner of two businesses. Sunrise Enterprise of Columbia, South Carolina’s oldest African-American owned public relations firm specializing in marketing and consulting, was founded in 1986 and Sunrise Family Health Benefit Services was founded in 2010.

In 2006, Bible Way Church of Atlas Road was named one of “America’s most influential churches” by Dr. John N. Vaughan, founder of the American Society for Church Growth. Vaughan features the congregation where Jackson is the senior pastor, in Volume I of America’s Most Influential Churches. Bible Way Church of Atlas Road is the only South Carolina congregation featured in this first volume on mega churches.

Jackson is also the author of “A World of Possibilities,” an inspirational book designed to unleash the power of possibility within every individual. Pastor Darrell Jackson, Sr. is married to the former Willie Mae Rooks of Spartanburg, South Carolina; they have two sons, Darrell Jr. and Antione Joseph (Kourtnee), two granddaughters, Kembrielle Janae Jackson and Kynidee Danielle Jackson and a grandson, Andrew Joseph Jackson.

Home | About Us | Senior Pastor